SNEAK PEEK of The Road to Nowhere

Holy shit, have you heard Boyfriend yet?

You know, Boyfriend, the first single released off Tegan and Sara's forthcoming eighth album, Love You to Death (#LY2D). No?

Well do yourself a favor and click play on the video below, have yourself a listen, then come back and we can talk about how amazing it is.

First reaction: Boyfriend is catchy as ALL HELL. It's a clap-along, sing-along, stadium-shaking pop anthem. It's fun, fun, FUN.

But Boyfriend is more than just a fun pop song, and it's so not the first amazingly awesome Tegan and Sara single. Remember Hell, the first single released from Sainthood? And who could forget Closer from Heartthrob?

[Time for a quick aside that will place Boyfriend within the larger context of Tegan and Sara's catalogue and also prove my credentials as a mega-fan.

Frozen was released as a single ahead of the release of their first album, Under Feet Like Ours. It's a damn good song, but it's not my favorite song from the album. That would be This is Everything.

The First was, appropriately, the first single for This Business of Art, and although it tends to stay in my favorite three songs of Tegan and Sara's second album, it has never been my ABSOLUTE favorite. That would be My Number.

Tegan and Sara's third album was If It Was You. Time Running was the album's first single. GREAT song, but not my favorite from the record. Living Room is, and I had the absolutely great fortune to see them perform it live in concert during the Sainthood tour. (*Fans self* Is it hot in here? That was something else, let me tell you!)

After If It Was You came So Jealous, and the single Walking With a Ghost. I'm no different than anyone else. I LOVE that song, but it's not my favorite from the album. My favorite song from So Jealous is the much poppier Speak Slow.

And then there came the album that first introduced me to Tegan and Sara: The Con. Back in Your Head and The Con were both released as singles for the album, and for the first time a single is my favorite song! That would be The Con. Not Back in Your Head, sorry.

Buuut! That didn't last long. Hell was Sainthood's single, but The Ocean is my favorite song from THAT album.

And then there was Heartthrob. Closer was the single. And OH. MY. GOD. That song. Everyone loved that song. Even Taylor Swift. She invited Tegan and Sara to perform Closer with her on her tour. (!!!) And, Closer is tied with Drove me Wild for favorite song of the album.]

Boyfriend is, like I said, really really fun. But it's more than that. It is beautifully and unabashedly true. Tegan and Sara have never shied away from telling the truth in their songs, but Boyfriend feels like a new level off honesty.

From the very beginning of their careers, Tegan and Sara have been openly gay. Their fans have always known it, the industry has always known it. Everyone's known. And they have recorded a lot of love songs over the span of seven albums, but the love interests of their songs have always been "you."

From And Darling: Creep up and tell me that you/ you love me more each time you look into my eyes

Of course, the focus of Boyfriend is still "you." And like I said before, Tegan and Sara have never been shy about the fact that they're gay. But Boyfriend is their fist single that sounds so undeniably and unapologetically gay. Pitchfork called it unmistakably queer (in a review that also labeled it the best new track of the week). The brilliance of Boyfriend, though, is that it has heaps of queer cred wrapped in an obsessively catchy mainstream pop anthem.

And Tegan and Sara have released this gem at probably the perfect moment in history. Read the Buzzfeed article that called Boyfriend a right-to-reply from "the silent partners of 'I Kissed a Girl' or Demi Lovato's 'Cool for the Summer.'"

Sara has said in interviews that Boyfriend is about the beginning of her current relationship, when her girlfriend was still in a relationship with a man and was keeping Sara a secret. Sara didn't want to be a secret anymore, and now she doesn't have to be--not in that relationship, and not in any sense.

And why should anyone? Gay marriage is now the law of the land in the United States. Like the title of that buzzfeed article asserts, the rest of the world has FINALLY caught up to Tegan and Sara. No more secrets, just awesome music.

And if there are going to be fun, catchy pop anthems about queer love triangles, let them be sung by proud, out lesbians. Not Demi Lovato or Katy Perry. 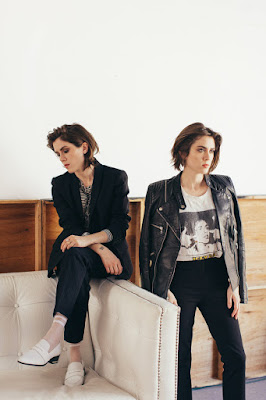 Posted by Shana Lynn Hammaker at 10:21 AM No comments:

Dispatches from The Road to Nowhere